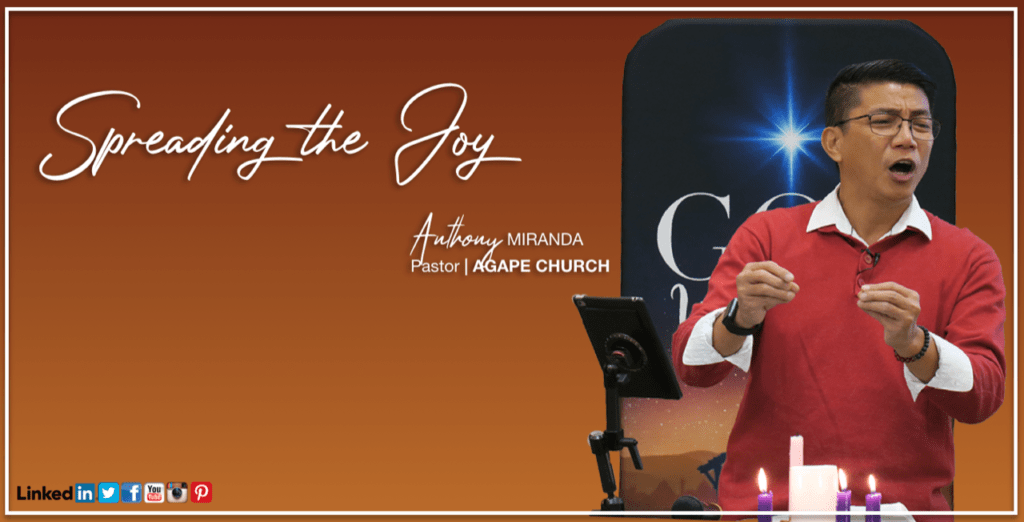 And there were shepherds living out in the fields nearby, keeping watch over their flocks at night. An angel of the Lord appeared to them, and the glory of the Lord shone around them, and they were terrified. But the angel said to them, “Do not be afraid. I bring you good news that will cause great joy for all the people. When the angels had left them and gone into heaven, the shepherds said to one another, “Let’s go to Bethlehem and see this thing that has happened, which the Lord has told us about.” So they hurried off and found Mary and Joseph, and the baby, who was lying in the manger.

When they had seen him, they spread the word concerning what had been told them about this child (Luke 2:8-10,15-17). The role of the Shepherds is to “spread the word”, the word about the Joy that the Lord brings to this world when He first came in a very humble manner. Whenever we come to His season, you see the word “Joy” all over the place. But a lot of people don’t really understand what it meant. It is easily mistaken by many with the word happiness. But they are not the same. Happiness is based on “happenings”.

When you go to happy place, you experience happiness. Happiness is Temporary. Merriam-Webster dictionary defined “happiness” as “pleasurable or satisfying experience”. “A state of well being and contentment”. On the other hand, Joy is eternal. It was defined by the same dictionary as “a source or cause of delight”. Luke 1:47 (GW) says, “47 My spirit finds its joy in God, my Savior”. Joy is a character, a commitment, a choice. To find true joy we should know the “ABC that Kills Joy” which are Anxiety, Bitterness and Confusion.